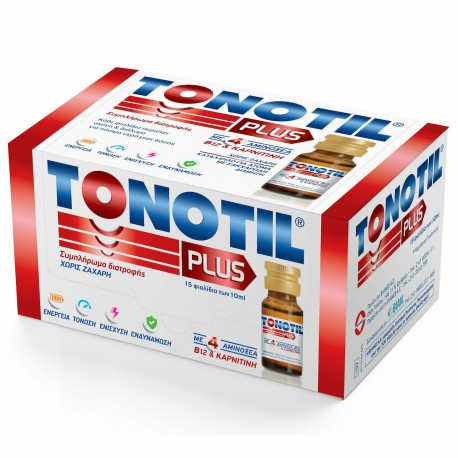 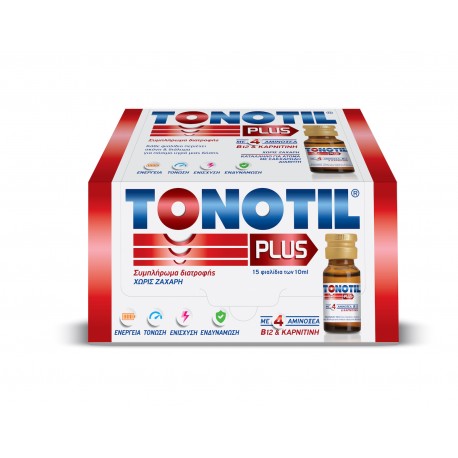 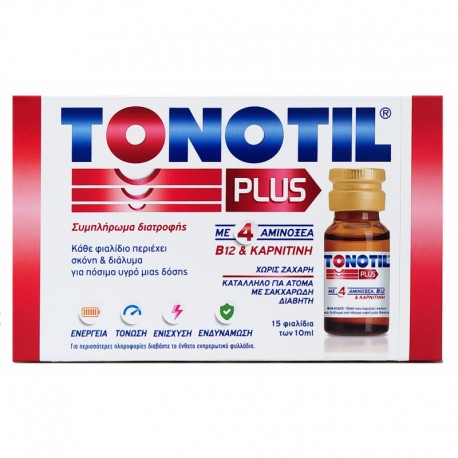 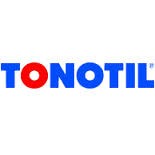 TONOTIL Plus with carnitine and 4 amino acids is intended for people who need a great deal of energy and power for a long time and is particularly useful for people with physical or mental stress. Relaxes from physical, mental and mental fatigue, fights against nervous overload and aids recovery after surgery or any illness. It also ensures the daily administration of valuable regenerative substances (essential amino acids) to the body.

ΤΟΝΟΤΙL Plus with carnitine and four amino acids is recommended for individuals requiring superior energy and strength for large time periods. It is especially useful for:

ΤΟΝΟΤΙL Plus contains precisely what is present in Tonotil, with its four amino acids, and also includes carnitine. Carnitine, a compound essential to the body, is found mostly (90%) in the musculatory system, and especially in cardiac muscle. It exists as the exclusive carrier of higher fatty acids to the mitochondria which are found in cells and are the 'factories' of the bodies energy production.

Carnitine is a compound which is biosynthesised by the body or can be taken in through foods such as meat products. A deficiency thereof can cause serious problems.

Always be used with the instructions of the company.

Its use does not replace traditional medicine but complements it, so ask and follow the doctor's advicesand instructions. 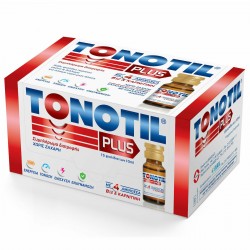 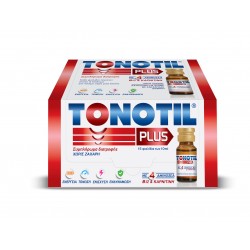 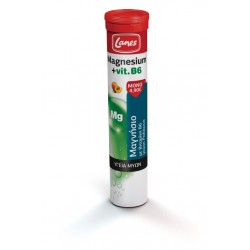 Regular price €4.90 Price €3.92 -20%
Add to cart
Availability: Out of stock
Lanes magnesium with vitamin B6 food supplement combines magnesium metal, which plays a multiple role in the organism's normal function and vitamin B6 that helps its absorption. Its daily intake meets the needs of the organism. 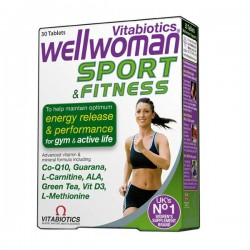 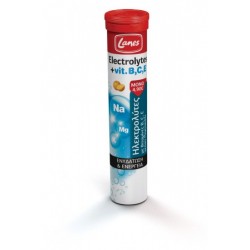 Regular price €5.00 Price €4.00 -20%
Add to cart
Availability: Out of stock
Lanes nutritional supplement with electrolytes and vitamins B, C and E is a formula for hydration and electrolyte replenishment of the body. Contains magnesium, sodium and potassium, replenishes the body's needs and offers rejuvenation and hydration before, during or after exercise 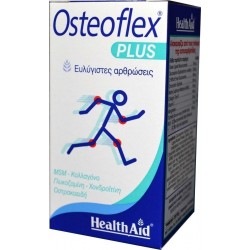 Regular price €40.90 Price €28.63 -30%
Availability: 11 In Stock
Osteoflex Plus formulation provides nutritional support for healthy joints and cartilage. It is a unique combination of high-grade Glucosamine, Chondroitin Sulphate and Hyaluronic Acid, with added Vitamin C, Turmeric and Manganese to help maintain supple, flexible joints, strong cartilage and a healthy skeleton. These nutrients also work together towards reducing oxidative stress on the body, therefore contributing to a feeling of youthfulness. 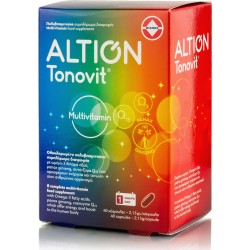 Price €22.01
Add to cart
Availability: Out of stock
Altion Tonovit Multivitamin is a multivitamin that provides immediate stimulation and energy, as well as full coverage of the nutritional needs of adults. It contains all the necessary vitamins, minerals, trace elements as well as coenzyme Q10, ginseng and omega 3 fatty acids. 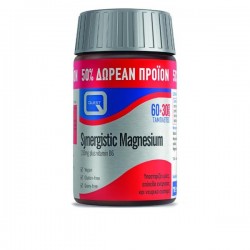 Regular price €19.97 Price €14.98 -25%
Add to cart
Availability: Out of stock
The food supplement Synergistic Magnesium 150mg of Quest provides the body with magnesium and vitamin B6, which increases the absorption. As a dietary ingredient magnesium is very important for proper muscle function. Its deficiency can cause severe cramps and spasms in the muscles, and even severe headaches. 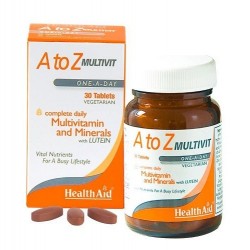 Regular price €13.00 Price €9.10 -30%
Availability: 3 In Stock
A-Z Multivit tablets provide a balanced vitamin and mineral supplement ideal for whole family, athletes and people doing strenuous exercise and energetic work or for anyone looking to safeguard dietary intake of these important nutrients. They are also beneficial for women during their monthly cycles. 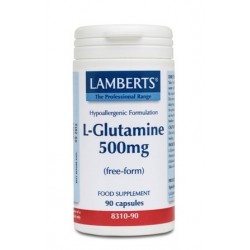 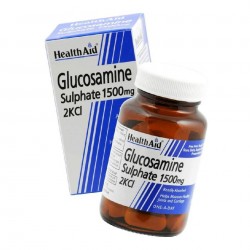 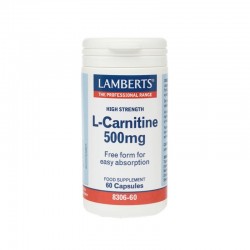 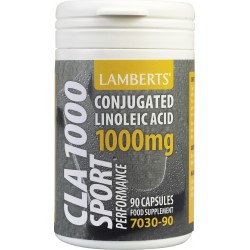 Regular price €35.08 Price €24.56 -30%
Availability: 1 In Stock
Naturally present in our modern diet, but in significantly lower amounts than some researchers believe necessary, CLA is believed toinfluence the way our bodies store fat. Studies have shown that CLA may help people to maintain an optimum balance between body fatand lean muscle when it is used in conjunction with regular exercise and a healthy diet. CLA is therefore likely to be of interest to athletes onvery low fat diets, and those people concerned about body composition and shape. 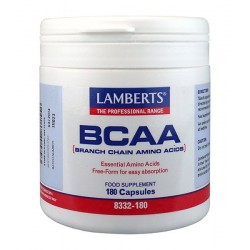 Regular price €46.00 Price €32.20 -30%
Availability: 8 In Stock
This is a great way to boost your intake of BCAA's with each tablet providing a full 250mg of L-Leucine, 125mg of L-Isoleucine and 125mg of L-Valine. This 2:1:1 ratio is thought to be the optimal ratio for these three essential amino acids. As with our other amino acids they are presented in their 'free-form' which means they are ready to be absorbed and used by the body. 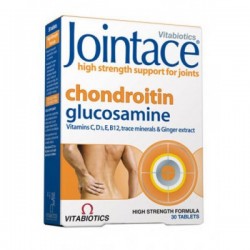 The nutritional supplement of JOINTACE Chondroitin Vitabiotics contains two tablets per 1000mg 400mg sulfate glucosamine and chondroitin sulphate. Glucosamine sulfate and chondroitin sulfate are structural components of articular cartilage. Glucosamine sulfate contributes to the mobility and flexibility of cartilage, ligaments and tendons while reducing pain by reducing inflammation in those sections. Chondroitin sulfate involved in maintaining the lubricating properties in liquids joints and prevents the action of enzymes that degrade cartilage, contributing to the mobility, elasticity and flexibility of the joints. It is also a powerful anti-inflammatory and therefore reduces joint pain. It has been shown that glucosamine sulfate and chondroitin sulfate act synergistically to achieve reconstruction and repair of cartilage. In JOINTACE Chondroitin is also included ginger, has anti-inflammatory and antioxidant properties, helping to reduce pain, maintain mobility and protection from the stiffness of the joints. Vitamins and minerals contribute to healthy joints through their involvement in pathways of inflammation through their antioxidant or through their contribution to bone health and calcium metabolism. 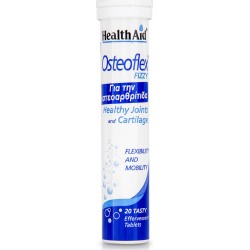 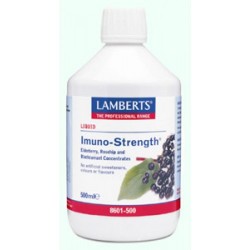 Elderberry, rosehip and blackcurrants are all exceptionally rich sources of important compounds called flavonoids, including anthocyanidins that are known potent antioxidants. These compounds are believed to support the immune system by maximising the patients antioxidant defence against free radicals.

The flavonoid family found in these three fruits is uniquely positioned for such a task, since they are physiologically active in both lipid and aqueous environments in the body, which makes its overall antioxidant properties many times that of vitamin C or vitamin E. Many studies spanning decades of research consistently and repeatedly show that maintaining a high antioxidant defence system helps to stimulate and support the immune system.

Imuno-Strength® is a tasty natural blend of elderberry, rosehip and blackcurrant concentrates carefully formulated to retain the nutritive properties of the fruits. Recommend to those 5 years and upwards as a tasty way to boost the intake of these powerful plant compounds. 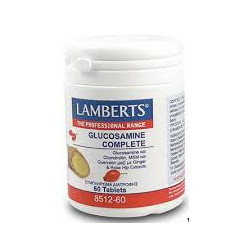 Regular price €23.10 Price €16.17 -30%
Availability: 3 In Stock
Glucosamine Complete Glucosamine with Chondroitin, MSM & Quercetin plus Ginger & Rose Hip Extracts. This is a high strength glucosamine and chondroitin formula that also provides potent levels of other nutrients. Each ingredient has been selected based on their different, but complimentary, functions and are presented at levels that are nutritionally relevant. Three tablets provide the full 1400mg of glucosamine sulphate, the level used in many studies, as well as 330mg of chondroitin sulphate (see note below) and 150mg of MSM per daily dose. The powerful bioflavonoid quercetin has been included at a potent 50mg, plus 1200mg of ginger (as a concentrated extract), as well as 400mg of rose hip. Few, if any, joint formulas provide these potencies in a single formula.
Product added to compare.